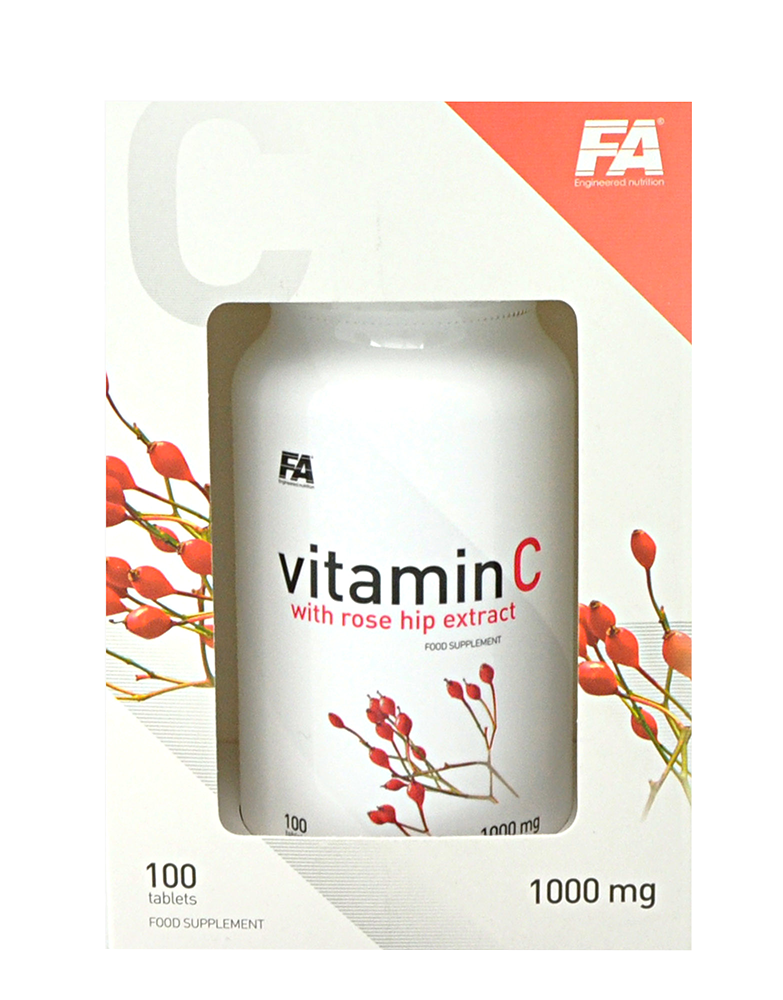 Ask your question about this product here!

Vitamin C with rose hip extract is a unique dietary supplement that contains in each tablet 1000 mg of L -ascorbic acid in combination with rosehip extract and bioflavonoids extracted from bitter orange .

Vitamins are a group of organic compounds common in the world of fauna and flora, which are necessary for growth and preservation of organisms that are unable to synthesize them or that synthesize them in insufficient quantities. Without knowledge about chemical structure of those isolated compounds (vitamins) they were named with letters of the alphabet (vitamin A, B, C, D) but along with further researches vitamins were named systematically and were divided according to its properties. The basic division of vitamins classifies them into water-soluble and fat-soluble - and this feature is critical when choosing natural food sources that supply vitamins. Vitamins A, B, C as the water-soluble are primarily found in fruits and vegetables, and a source of vitamins A, D, E, K - fat-soluble materials are mainly found in animal produce (fish, meat, offal ) .

The human body has the highest need for vitamin C. The recommended intake (per day) for vitamin C was set at a level of 80 mg / person / day. Biologically active compounds having vitamin C activity are: L- ascorbic acid and L-dehydroascorbic acid. Name of ascorbic acid was taken from the first discovered attribute of this compound – it’s antiseptic. Chemically, L- ascorbic acid is an enol form of 3-oxo-L-gulofuranolactone, which is a compound very commonly found in nature. Very large amount of natural vitamin C is found in citrus fruits and the largest amount in the fruit of acerola, rosehips and hibiscus. Vitamin C has been used as an effective cure for scurvy among sailors staying at sea for months in the beginning of the modern era. The main and essential effect of vitamin C on human body is that it’s involved in redox processes. Vitamin C, having the ability to inactivate free radicals, together with other biological antioxidants protects against peroxidation of protein molecules, lipids, carbohydrates and nucleic acids.

Vitamin C is necessary for each human body because:

Contributes to the protection of cells from oxidative stress - inactivates free radicals, which have adverse effect on body's cells , Contributes to maintain the normal function of the immune system during and after intense physical exercise. To have a steady concentration of vitamin C, an adult should dose every day at least 60 mg of ascorbic acid – this quantity is needed in metabolism. According to prof. Linus Pauling, double laureate of the Nobel Prize, and Dr. Matthias Rath, the founder of Cellular Medicine daily intake of vitamin C should be in the range of 600 mg to 3000 mg to ensure optimal health. Those doses were determined after many years of researches carried out by scientists. Since ascorbic acid has no ability to accumulate in our body it must be constantly supplied with food or through supplementation. Absorption of vitamin C occurs in the small intestine by active transport of a relatively high efficiency (70-80% ), but with increasing to a few grams dose (per day) this efficiency is significantly reduced. The excess of ascorbic acid is almost completely eliminated from the body, mainly in the urine. The deficiency of vitamin C is most common in alcoholics, smokers, the elderly and poorly nourished but you should be aware that due to inability of accumulation as well as solubility in water people with increased physical activity should provide greater amounts of vitamins in order to supplement those removed with sweat. Vitamin C deficiency is manifested most often by body weakness, breaking of blood vessels, increased susceptibility to infections, swelling and bleeding gums, loosing teeth and rotting inflammation of dental alveolus. Toxicity of ascorbic acid ( vitamin C ) is small, and it is observed when using very high doses - from several to several tens of grams per day, which is manifested by diarrhea, inflammation of the stomach and intestines.

The rose hip extract is a chock-full of vitamin C. In addition to the large amounts of vitamin C, rose hip is contains vitamin P, K, E, B-vitamins and provitamin A. It’s also a source of carotenoids (beta-carotene, lycopene and zeaxanthin), tannins, sugars, pectins, organic acids (citric acid and malic acid ), mineral salts and essential oils. Due to the presence of so many biologically active substances ( antioxidants, vitamins and polyphenols ) rose hip fruits are recommended to support the immune system, colds, the excessive fragility of blood vessels, gall and kidney stones. Those fruits are also recommended in inflammation of alimentary canal, diarrhea, stomach and duodenal ulcer, rheumatism and burns but also convalescents after illness and in states of general weakness and tiredness. Rose hip should be included in the diet plans of all athletes because it keeps joints healthy and flexible.

Bioflavonoids - group of organic compounds found in plants, which serve as colorants, antioxidants and natural insecticides but also fungicides protecting against insects and fungi. Most of these dyes is stored in the surface layers of plant tissue, giving intense color and reducing harmful effects of ultraviolet radiation. Bioflavonoids were discovered in the thirties of the twentieth century by Hungarian scientist Albert Szent- Gyargyi. This is a very large group of substances - so far 4,000 chemical compounds have been found. Citrus bioflavonoids are biologically active substances derived from citrus fruits such as oranges, lemons, grapefruits, limes and tangerines. All flavonoids are based on the structure of 2-phenylchromen, wherein most types of flavonoids (except for catechins and anthoxanthins) comprises a flavone structure, with the ketone group in position nr 4. The chemical structure of flavonoids based on the structure of flavone affects the antioxidant properties arising from the possibility of neutralizing the presence of free radicals produced in the oxidative processes. Products containing bioflavonoids are recommended during periods of increased susceptibility to infections like colds and flu but also to support the body in industrial diseases which exposure the body to the adverse effects of oxidative stress (atherosclerosis, heart disease and even cancer ) - due to the chemical structure of molecules.

Please Note: We try to maintain our Food Supplements Label Database accurate, but manufacturers may change the composition and the label of products without notice as they change and develop them. For this reason we can not have liability for accuracy of data, and therefore they serve for informational purposes ONLY. We are constantly working on keeping them as accurate as possible.